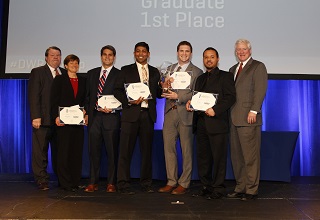 Startup business-plan guru Carol Reeves of the Walton Business College has been named the 2014 SEC Faculty Achievement Award winner for the UA.

On Wednesday, Reeves led another successful contingent of UA students to the DWR Governor's Cup business-plan competition. UA teams advised by Reeves swept the top three places in the graduate division for the 11th straight year.

In all, the UA took eight of the 10 Gov Cup prizes awarded, and Reeves with Allen Frazier of Harding was named one of the inaugural recipients of the Sam Walls Entrepreneur Educator Award.

Here's more on the Gov Cup from Arkansas Business.

And here's a look at what Reeves' business-plan teams from the Walton College have accomplished in the last five years or so, courtesy of the UA:

And finally, here's more on Reeves' SEC award from the UA:

Reeves honored for national contribution to teaching and research

FAYETTEVILLE, Ark. –The Southeastern Conference has announced that Carol Reeves, the Cecil & Gwendolyn Cupp Applied Professor in Entrepreneurship at the University of Arkansas, is the recipient of the university’s 2014 Faculty Achievement Award.

The award honors professors from SEC universities with outstanding records in teaching and scholarship who serve as role models for other faculty and students.

“The 2014 SEC Faculty Achievement Award winners are some of our nation’s most accomplished instructors, researchers and scholars,” said Jay Gogue, president of Auburn University and president of the SEC. “It is my great pleasure to preside over an intercollegiate athletics conference that not only recognizes their work, but strives to support it as well.”

In addition to her faculty appointment in the Sam M. Walton College of Business, Reeves serves as associate vice provost for entrepreneurship at the University of Arkansas. In that role, Reeves promotes entrepreneurship and economic development in Northwest Arkansas and across the state. She works with faculty and students in all colleges at the University of Arkansas to encourage the start-up of new companies based on university research.

Under Reeves’ guidance, the university has fielded competitive graduate student teams at state, regional, national and international business plan competitions since 2002. During the past decade, students have won more than $2 million in cash at these competitions.

“We were thrilled that Carol Reeves was selected as the University of Arkansas’ SEC Faculty Achievement Award recipient,” said Sharon Gaber, provost and vice chancellor for academic affairs. “Dr. Reeves is both well-known and respected for her outstanding work in developing nationally competitive collegiate business plan teams.”

Reeves advised or co-advised four of the six University of Arkansas teams who made the finals of the 2014 Donald W. Reynolds Governor’s Cup Collegiate Business Competition. The University of Arkansas has won the graduate division at the Governor’s Cup 11 consecutive years, and placed the top three teams in the graduate division in three of the last four years.

Reeves has been an exceptional teacher. In 2010, she received the Arkansas Alumni Association’s Distinguished Faculty Achievement Award for Teaching. She was also selected for the University of Arkansas Teaching Academy in 2011.

“I’m very honored and flattered by this award,” Reeves said. “This recognition would not have been possible without the tremendous efforts of my students and those from the community who mentor them.”

The SEC Faculty Achievement and SEC Professor of the Year Awards were created in 2012 to honor and celebrate, at the conference level, university faculty and their achievements and contributions in scholarship, research and service.

Selected by a committee of SEC provosts, the SEC Faculty Achievement Awards and the SEC Professor of the Year Award are part of SECU, the academic initiative of the conference, which sponsors, supports and promotes collaborative higher education programs and activities involving administrators, faculty and students at its 14 member universities.